An intense weekend of being baby

Well our weekend started on Friday…

It was a slow start I got in from work and half our kids were away to their dad.  Mistress Mummy had said that when the kids were away it was time to play.  There was no nappy but the night progressed and Mummy told me to have a shower and then go upstairs and set up my cot for sleep … OMG…
It looks like this… 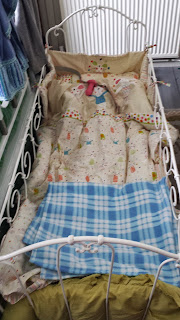 (Baby’s bed)
As you can see its not very big.  It converts into a day bed but its still only about 1 metre 60 long and about 65cms wide. So its very snug – to say the least.     Mummy joined me upstairs and she had my milk in her hand.  The very big bottle of milk!  She told me to lay on the bed, and started to lick my nipples and play with my weenie until it was very hard and then she placed me in my nappy (she knows how this frustrates me) and also a little blue outfit she likes me in.   I laid on mummy chest and drunk my milk, it takes me a little while as the bottle is so big – but it was soon all gone.  So I was told to go and climb in my cot and mummy would tuck me in.  I climbed in the cot, and curled up so I could fit and mummy gave me my dummy and tucked me in.  I was told I should try and stay in my cot and if I couldn’t sleep I was allowed in the bed but I must not disturb mummy or I would get punished.  Mummy should me her minion she would be cuddling and tucked me in.  It’s really strange for somewhere so cramped, I find something comforting from being there and in no time I was falling asleep listening to mummy sleeping.  I woke twice and turned over to get comfortable and fell to sleep, it was some time in the morning – it was dark still but I woke up and climbed out of my cot and carefully climbed into the edge of the bed. Mummy was asleep with her minion in her arms and looked very peaceful (baby was really jealous of that minion!).
We awoke in the morning (me with a dry nappy still – I really cant wet lying down yet)  and mummy told me she would fix me breakfast.﻿ She brought me back a bottle of milk and a bowl of porridge.  She placed my baby bib on me and fed me my breakfast.  I always enjoy being fed by mummy and find my weenie gets quite hard in my nappy when mummy feeds me.    After breakfast mummy told me It was time to get ready to go out.       I was told to lay on my side and mummy then inserted a finger into my bottom.  She was moving her finger around and it felt really nice and baby was getting really excited and then mummy pushed more fingers in and then stopped.  She told me something bigger was coming and mummy then pushed a large black butt plug into my bottom.  Mummy helped me into a special leather harness and fixed the plug to this to hold it in place.  Then came my nappy, which mummy decided to tape on to hold it in place and then finally my big PVC pink locking pants (see previous post).  So now baby was plugged, nappied and locked in plastic pants.  Every step I made I could feel the plug, the nappy rubbing between my legs and then chain from the plastic pants digging in my stomach and sides.      Mummy told me we were going for a walk with our dogs.   We went out in the car, I was driving and sitting down I could feel the plug being forced hard inside me.  We walked for ages about 1.5 miles before coming home.  I was one tired baby when we got home.
Mummy told me it was dinner time but I was to eat like an adult so mummy fixed me pizza and then said she wanted me to listen to my bed wedding hypnosis cd and I was to come upstairs.   Mummy got out of the cupboard my black pvc dress and the leather isolation hood.  She placed the ear phones in my ears and then placed the hood over my head and pulled the laced in very tight before sliding the dress up me and zipping it shut and helped me step into my cot. 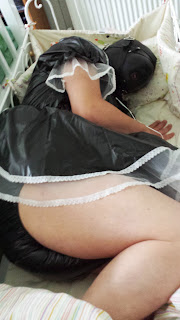 (Baby in his bed ready for listening undisturbed)
Mummy pressed play and for the next hour my ears filled with noise of the hypnosis MP3. I am no sure it works but find I go into a very relaxed state with the MP3.   My dress has a very padded diaper section and along with my own nappy it felt very warm and comfortable.
Mummy came back up and awoke me and removed the hood and my dress and told me to dress in my onsie as it was time to come back downstairs.
Our evening was spent with me attending to mummy and looking after her.  At bed time it was very similar to Friday.  Mummy rubbed my weenie until it was very hard and then placed it in a very tight nappy before giving me my milk and telling me climb in my cot.  Mummy wanted me to listen to my hypnosis MP3 again.  I placed the ear buds in and tried to listen.  I remember it started but not finishing but found that night it impossible to sleep – and eventually gave up and climbed into the bed.  Mummy noticed me getting in but did not say anything.     The next morning she told me that I hadn’t lasted long.
We had a very quiet Sunday but mummy told me that my cot could stay up as long as it was in its vanilla position.  It looks like this… 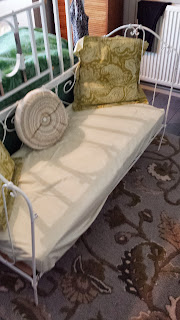 (Who would know its babys bed? )
So I went to bed with mummy as the children was back after a very eventful weekend!﻿
﻿

Posted by Lucy in Uncategorized on September 17, 2013