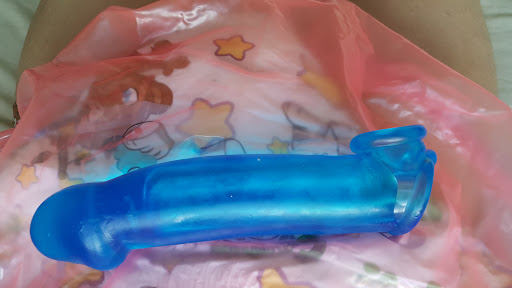 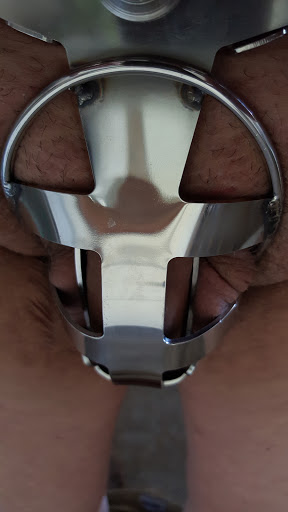 Last night Mistress was feeling horney, the belt has been working its magic and I was in need. So Mistress was wearing a very sexy body and told me that I was to finger her. The belt was still on and my constrained cock was trying to get hard, something in the belt you cannot do . It just leaves you semi hard… Anyway I was doing as I was told Mistress was getting very wet and was teasing me , both verbally and then physically. I was told to lay on my back and she licked and tweaked my nipples telling me how sexy her locked boy looked. I was told she wanted her pussy licking, so I knelt on the floor and did I was told (I love doing this so don’t need asking twice 🙂 ) Mistress became very wet and said

So I unlocked and removed the belt , no damage , as I expected as this belt is amazing and found the blue penis extender in the picture. Lubed up my little cock and pushed it inside. The extender was very heavy but Mistress loved it, orgasm after orgasm for her, my cock became hard inside it but I could feel nothing , a major turn on for me and for Mistress. When Mistress could take no more I was told to fetch a nappy and my pink PVC romper and I was teased and sucked until I was hard and then my nappy and romper was put on.  So this morning I’m awake and about to lock up again. And even more frustrated.